Summer is winding down, and my younger kids are heading back to school in a few weeks.  We have entered the portion of the summer where we start to feel it slipping away — and so we start to frantically fill the days with The Things We Meant To Do This Summer,  and haven’t yet done.  At the top of this list:  Summer Movies!

This brought us to the cineplex to see the newest release aimed at the kiddies.   The Smurfs.  Yikes. 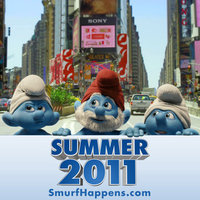 First, a disclosure.  Going in, my Smurf IQ was quite low.  I knew they were blue.  I knew they were European.  I knew they were, well, for the lack of a better word, irritating.   Beyond this, I was a blank slate.  Luckily, Neil Patrick Harris, one of the live action characters interacting with the little blue guys, also had a low Smurf IQ.  In a helpful addition to the film, he Googled the Smurfs.  Turns out they are from Belgium. 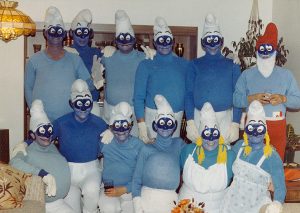 Belgium must be an interesting country.

Anyway, some of my other questions were not answered as satisfyingly in the film.    For example, the Smurfs are all brothers (plus one Papa Smurf and Smurfette, voiced by Katy Perry).  One Papa and 99 sons.  And no Mama Smurf.  And no explanation.  There has to be a back story to this, perhaps to be addressed in a Prequel?

And Smurfette.  She is the sister to all the other Smurfs.  But actually she isn’t.  Huh?  There was some mention of a spell, and a weird moment when the Smurf boys sort of “hubbahubba” Smurfette.  Huh?  Very suspicious.

Oh, and the Smurfs all have names that reflect their personalities.  Kind of like the Dwarfs.  Except Smurfette, whose only personality trait seems to be that she is female.  But it does result in a bit of fun as the audience learns some of the Smurf names, like Passive/Aggressive Smurf, Panicky Smurf and Narrator Smurf.  Hmmm.  They all end in Smurf, so Smurf must be their last name.  Except Smurfette.  Curious.

Anyway, the Smurfs have been transported through a wormhole of sorts from Belgium to New York City, followed by their nemesis, Gargamel, played way over the top by Hank Azaria.  They end up bunking with Neil Patrick Harris (Patrick) and his pregnant wife, played with dewy sweet purity by Jayma Mays, of Glee fame.

See, Patrick is an exec with a cosmetics company run by Sofia Vergara.  She is mean.  But she wears the most gorgeous pair of red patent peep-toe platform pumps in one scene, and another coral pair in another.  Woops.  Too much detail?  Anyway, she causes Patrick stress.   Oh, and he is stressed because he needs to prepare to be a daddy.  All of this, plus Smurfs,  leads to the lesson.  Cause there has to be a lesson, right?  Really, it is all just an excuse to put the live action characters and the Smurfs into different situations.

And Gargamel provides the menace, along with a fair share of comedy relief.  Azaria’s Gargamel is a living cartoon, and not particularly frightening, but there are some moments of menace that might be a bit scary for the little ones.  But rest assured, everything turns out ok.

Papa Smurf is voiced by none other than Jonathan Winters.  I didn’t know this going in, and I just could not place the voice.  This is a very subdued Jonathan Winters, but he does have a very soothing Papa voice.

Oh, and Tim Gunn, of Project Runway appears as Sofia Vergara’s assistant.  Curious.  I like Tim Gunn.  But I don’t expect any Academy Award nominations in his future.

Bottom line, you have seen this movie before.  Many times.  There is nothing original here.   The story is thin and inoffensive and the actors are likable and underused.   The film is well-intentioned, and, kinda’ like the Smurfs themselves, cute and a bit annoying at the same time.  This is not one of those kids movies that you will like as much, or even more than your kids do.  But you will be able to sit through it without feeling the need to plan an extended visit to the concession stand to preserve your sanity.

But the more important reviews are those from my kids.

My younger kids are 12 and  8.  Ashley, the 8-year-old, had been anxiously anticipating the movie.  Andrew, the 12-year-old,  only came because I made him.

Andrew –He gave it a 3 out of 5.  At first, he thought it was hilarious how the Smurfs used the word “Smurf” as a replacement for many words, including possibly curse words,  and in phrases that were somewhat (shall I say it?), blue.  Andrew likes the fact that, as a middle-schooler, he knows many curse words and inappropriate phrases.  He enjoyed making the translations in his head.  According to him, this wore thin after awhile, and then the movie was “just ok.”  But, he sat through it without once complaining, at least after the film had started.  This suggests some accomplishment by the filmmaker.

Ashley — She gave it 3 1/2 out of 5.  She thought the Smurfs were adorable.  She loves Katy Perry.   She didn’t get most of the “Smurf as a replacement for bad word” stuff, but she liked the story.  She wanted to know if it was made by the same people who made Enchanted because she said it was basically the same.  And it reminded her of Alvin and the Chipmunks.  Ashley likes Alvin and the Chipmunks.   She got a bit klingy when a few Smurfs were in temporary peril, but I think she actually sort of enjoyed that.  She will, no doubt, want to watch Smurfs, The Movie, repeatedly on On Demand.

We saw the movie in 3D because that was the showtime that worked for us.  Don’t bother with 3D.  Other than when the Smurfs go down the portal to New York, there really isn’t any time that the 3D is noteworthy.

This is a bit off point, but why does every movie have to be in 3D?  It is ridiculous.  My kids are always talking about 3D.   The other day, Andrew threw something right at Ashley’s face (don’t worry, she was fine).

She has a point there.